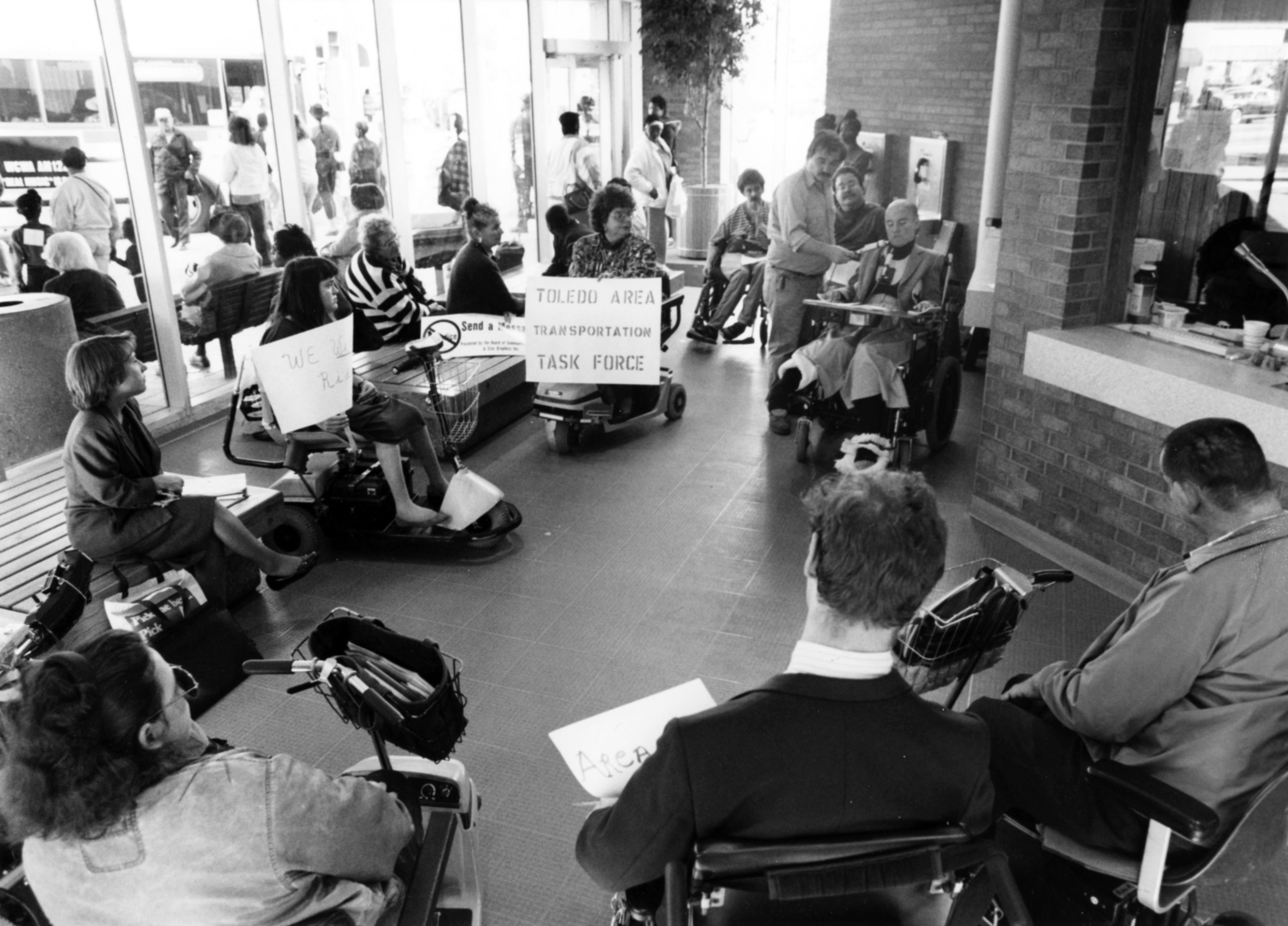 The Americans with Disabilities Act 30th Anniversary Blog – Part One

“Let the shameful wall of exclusion finally come tumbling down.” – President George H.W. Bush on the passing of The Americans with Disabilities Act

Introduction
Thirty years ago, on July 26, 1990, The Americans with Disabilities Act (ADA) was signed into law by then-President George H.W. Bush. In celebration of the 30th Anniversary of The Americans with Disabilities Act, this blog post will take a look at the history of disability rights leading up to the ADA, the progress we’ve made since the passing of the ADA, and what ADA Coordinators and other professionals can continue to do to ensure a future that truly is accessible for all.

The Years Prior to the Passing of The Americans with Disabilities Act
In 1962, a young man, Ed Roberts, decided that he would attend UC Berkeley, even though they had no accommodations for people with severe disabilities, such as himself. He advocated that the University provide solutions to allow for him to live on campus, and the resulting solutions soon made it possible for other disabled students to attend, paving the way for the creation of the Physically Disabled Student’s Program and then the Center for Independent Living, which was the first of many centers for independent living – like The Ability Center – which help people with disabilities to live independently in communities throughout the country.
Section 504 of the 1973 Rehabilitation Act was the first U.S. federal civil rights protection for people with disabilities, but neither the Ford nor the Carter Administration acted to implement it. Because of this, in 1977, disability rights activists took matters into their own hands and staged sit-ins all over the country. At the San Francisco Office of the U.S. Department of Health, Education and Welfare, activists staged the longest sit-in of a federal building in U.S. History – 25 days.

The sit-ins and other direct action proved effective. In 1977, section 504 was signed and implemented. This showed disability rights activists that they had the power to shape federal legislation. As a result, around the country, groups and individuals took to practicing direct action and governmental lobbying and service in order to achieve their goals. One such goal was access to public transportation. The fight to get transportation access was led by a new coalition of activists called ADAPT. This national grassroots organization staged actions across America, often physically imposing themselves in front of buses to demand attention for their cause.

The Deaf community, long plagued by audism – discrimination based on the notion that people who can hear are superior – united around a contest over the leadership of Gallaudet University. Students and their supporters rallied around the idea that Gallaudet, the world’s only liberal arts university for Deaf and Hard of Hearing students, must have a Deaf president for the first time in its history. When the Board appointed a non-Deaf president, students led marches, sit-ins, and other direct actions. Eventually, in 1988, the Board of Trustees named Dr. I. King Jordan the first Deaf president and took other steps to empower the Deaf community to participate in governing their university.

All of this led up to passing of the Americans with Disabilities Act, which was the culmination of decades of work. The ADA promised the right to reasonable accommodation, fair treatment in employment, and an overall country-wide awareness of disability rights. The bill required direct action, legislative determination, and support from the White House. After years of work by so many people in and out of D.C., the ADA had passed the Senate but seemed stalled in the House. Over 1000 protestors came to Washington in March of 1990 to protest the delay. In a dramatic event, some activists cast aside crutches and wheelchairs and pulled themselves up the 83-steps of the Capitol building. The crawl symbolized the lack of accessible spaces that disabled Americans faced every day. Along with hard work behind the scenes, this activism propelled the ADA forward towards passage.

The Years Following the Passing of the Americans with Disabilities Act
Olmstead v. L.C.

On June 22, 1999, the United States Supreme Court held in Olmstead v. L.C. that unjustified segregation of persons with disabilities constitutes discrimination in violation of title II of the Americans with Disabilities Act. The Court held that public entities must provide community-based services to persons with disabilities when (1) such services are appropriate; (2) the affected persons do not oppose community-based treatment; and (3) community-based services can be reasonably accommodated, taking into account the resources available to the public entity and the needs of others who are receiving disability services from the entity.
The Supreme Court explained that its holding “reflects two evident judgments.” First, “institutional placement of persons who can handle and benefit from community settings perpetuates unwarranted assumptions that persons so isolated are incapable of or unworthy of participating in community life.” Second, “confinement in an institution severely diminishes the everyday life activities of individuals, including family relations, social contacts, work options, economic independence, educational advancement, and cultural enrichment.”

The ADAAA was passed in September of 2008 in response to a number of decisions by the Supreme Court that had interpreted the original text of the ADA. Congress stated in its introduction to the ADAAA that those decisions limited the rights of persons with disabilities so the ADAAA reversed those decisions by broadening the law. Specifically, the ADAAA changed the definition of the term “disability” by clarifying and broadening it – which, in turn, increased the number and types of persons protected under the ADA and other federal nondiscrimination laws. The ADAAA was designed to strike a balance between employer and employee interests, as it was felt that employer interests had been favored too much previous to the amendments.
One thing that the ADAAA required was that courts interpreting the ADA and other federal disability laws focus on whether the covered entity had discriminated, rather than whether the individual seeking the law’s protection had an impairment that fit within the technical definition of the term “disability.” The Act retained the ADA’s basic definition of “disability” as an impairment that substantially limits one or more major life activities. It also retained the need for a record of such an impairment or being regarded as having such an impairment. However, the ADAAA changed the way that the statutory terms should be interpreted, again in the interest of broadening the interpretation, rather than accepting the previous narrow interpretations.

Where we’re at now, and the future
ADA Coordinators, like many of you reading this blog post, ensure that government entities comply with Title II and investigate any complaints that the entity has violated Title II. In doing this, ADA Coordinators make their communities more accessible places to live, work, and thrive. ADA Coordinators in the Toledo area have been doing great things to help make the community more accessible and disability-friendly.

The Ability Center’s partners at The Metroparks, under the supervision of ADA Coordinator Joe Fausnaugh, have been ensuring not only are their playgrounds accessible, such as the inclusive playground at Secor Metropark, but also that their facilities and other programming and activities are accessible and inclusive to all who wish to participate! They work with The Ability Center to make sure that new parks and facilities, such as the Cannaley Treehouse Village at Oak Openings Preserve. Municipalities such as the City of Perrysburg and the Village of Oak Harbor have worked with The Ability Center to help start the process of ensuring their downtown areas are accessible to all. In 2017, with the help of The Ability Center, The City of Toledo passed a Reasonable Accommodation Ordinance, which allows people with disabilities who need to make accessibility modifications to their homes within the City of Toledo to be able do so. For example, zoning laws often establish rules that can prevent people with disabilities from building ramps on their homes. The Toledo reasonable accommodation ordinance allows people with disabilities to request those exceptions quickly and without cost.
Furthermore, at least 20 local municipalities and entities have appointed ADA Coordinators and many have begun the process of a self-review and transition plan ADA Coordinators from all over the metro-Toledo Area have participated in The Ability Center’s ADA Seminar for the past 3 years! This shows commitment to learning and growth that can help achieve The Ability Center’s vision of the Toledo area becoming the most disability-friendly community in the country!

However, 30 years post-ADA we do not have time to stop, and must keep looking forward. There are still barriers present that keep people with disabilities from accessing their communities to the fullest extent. We must remember President George H.W. Bush’s words, and recognize that the “shameful wall of exclusion” has not yet been completely dismantled. Until it is, we cannot be satisfied, which is why the work of ADA Coordinators is so important. Thank you for all that you do.

Note: If you are a Title II entity and you don’t have an ADA Coordinator, or would like more information as to how to start the process of an accessibility self-review or transition plan, don’t hesitate to contact Katie Shelley, Disability Rights Advocate at The Ability Center of Greater Toledo for more information. She can be reached via e-mail or by phone at (419) 885-5733 x 120.

Would you like further training, a campus tour of The Ability Center, or both? You may request that here.